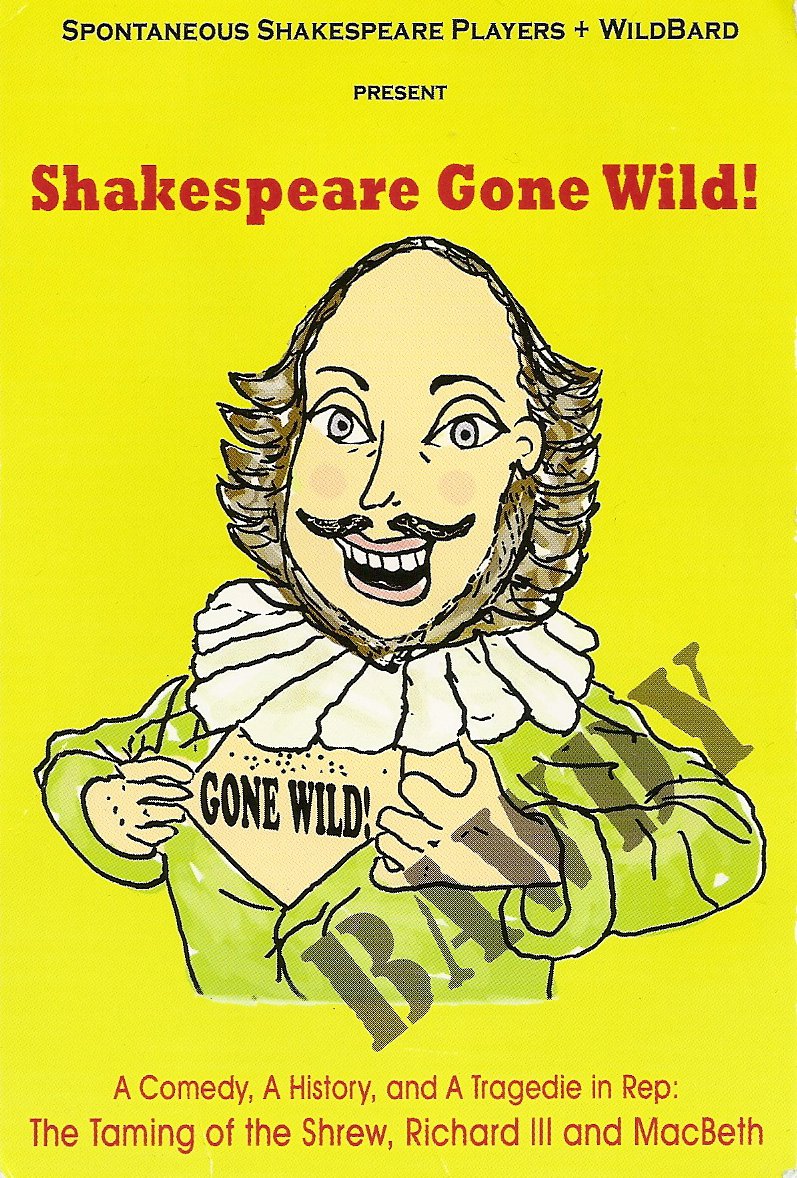 Good writing enables William Shakespeare’s plays to be reenacted centuries later on the lawns of Central Park. We are still reading and living the Elizabethan Era because of his plays of Romeo and Juliet and Much Ado about Nothing. Not only do I enjoy reading and seeing Shakespeare the mere essence of his works inspires me.

My friends and family endure movie after movie and play after play dedicated to Shakespeare’s Comedies, Histories, Tragedies etc. Recently I was in NYC. My best friend Crysbel and I were strolling through Central Park  and I said “Hey remember that time we saw Shakespeare on the Lawn? ” It was Love’s Labor’s Lost, I am hardly one to judge but I felt that it was an excellent rendition. And just after I spoke those words a gentlemen dressed in black handed us this flier. We caught Richard III the following afternoon where the actors performed without any rehearsals by using rolls (of parchment) that had their lines and cues. They could only read a couples lines at a time and had to roll their paper to get to the next part. I learned that is where the phrase leading role came from. The larger the roll you had the more lines, thus the bigger part.

For me there is no fame no fortune in my writing. I don’t expect my tales to be spun into plays or movies. I write because words travel around in my head to be put on to paper in the forms of poems and stories. While some writing is very private, most is aching to be read. And to be read for centuries now that is something worth writing.

It all started while reading Definitely Dead by Charlaine Harris.  By the way Definitely Dead is not my favorite in the Sookie Stackhouse series but that is a blog for another time. During my workout routine at the local gym I visit the sauna before and after exercising. Since I have built up a tolerance to the hot rock room, and my MP3 player always seems to die I began reading in there as I sweat out all my toxins.  One day while reading about Sookie and Bill’s issues of honesty I casually turned the page and suddenly it was in my hand. I looked from the separated page in my hand back to the book stricken. Well this is just great.

During cardio I devised a plan. Once home I dabbed supper glue into the fold and secured the page into its rightful place. Next, I wedged it on my bookshelf between two hardcovers and placed one on top to prevent the page from popping out. Voila! Like new! Unfortunately a few days later the same thing occurred but this time much worse. An entire chunk of the book separated from the spine. The adhesive glue was melting from the hot dry air. Therefore I repeated the previously mentioned fix. What a cheap book I thought. There should be a red label WARNING: Do Not read this book in saunas, steam rooms or any other remotely hot places. This may cause permanent damage to this book.

Definitely Dead underwent repairs, then after reading went on my shelf next to Dead as a Doornail. Perhaps a month later not only did I think that was a cheap copy to begin with, I completely forgot about the former incident. Imagine my surprise as my Princess Bride 30th Anniversary edition split into two pieces. One side dislocated from the cover entirely.  That’s it no more sauna reading for me!

I brought this dilemma of mine up to a couple fellow book club members. “How long are you in there?” one asks. You aren’t suppose to exceed twenty minutes.

“How do people approach you while you are reading in the sauna?” another questions.

Now that is all said and done I will not be caught reading in the sauna any longer.  At least not paperbacks.