Pepper use to have a bad habit of peeing everywhere. As a cat I’m  sure he was only marking his territory but it was disgusting. My sisters and I  would fight over whose turn it was to clean up the mess. At first it was squirts just enough to know he’d  been there and we thought he may be spraying. This was impossible though. Pepper had parted ways with his boys long before my little sister rescued him from our uncle’s. My mother took him to the vet and explained our problem. The vet squeezed Pepper where his manhood once was and made it clear there wasn’t anything left to spray.

My father was determined there was only one thing left to do. He sat Pepper in the passenger side of his truck and drove a mile down yonder to a family farm. Maybe Pepper was always meant to live on a farm. Dad placed Pepper in the grass “Bye bye Pee pee head” he said to Pepper as he meowed in protest. Then he drove away.

We didn’t  notice for a couple days that he was missing because he was an outdoor cat and roamed the neighborhood and terrorized others with his sweet but odd behavior. On the third day he was back. Dad said nothing as to not upset us but a week later tried again. He said farewell to Pepper at the farm then headed off to do errands. By the time Dad came back, Pepper was waiting in the front yard for him. The cat came back he couldn’t be away the cat came back to STAY.

Pepper was sitting in the middle of the road when I got home from work late last night. If I didn’t know better I’d think he was waiting for me. Before I pulled the car into the driveway he darted off into the darkness. When I opened the car door to step out he was at my feet. I had to step around his thinning body and when I shut the car door he spooked up like he does all Halloween cat looking and he disappeared. He was all shook up like cola.

I called him back as I made way for the front door. He did come back but lamely ran into my leg. He literally ran into it. Next he acted all natural and rubbed up against me as if he meant to do that. I leaned over to pet him and scolded him for getting so scrawny. Pepper followed me to the door but did not wish to come inside tonight. He can be a strange one.

There is no doubt my cat Pepper is an oddball all year through. However during the summer months he is even more peculiar. He begins to loose weight at a rapid rate and becomes even more uneasy. From a nurses perspective he looks dehydrated and emaciated.

I’ll go put a bowl of water out for him and bring him to the bowl. When I go to place him on the ground he puts his back legs down and stands up like a human, refusing to put his front paws down. Once I let go of him, he will back away from the water doing his own impression of the ‘moon walk.’ He is so paranoid. Sometimes I wonder if his delusions are getting to him and he fears I’m poisoning him. From his appearance you wouldn’t think he was eating or drinking. At times his cat food bowl will be full. At other times I catch him inhaling it like it is his last meal.

Pepper claws and tears up trees. He catches and torments small animals, sometimes he gets gutsy and goes for bigger things like squirrels and rabbits. He is a rabid beast during the summer (he’s been tested).

During the winter however, you will find a much calmer version of this same cat. We allow him in the house more with the frigid temperatures. He is still jumpy and has pressurized speech like the Meow Mix Cat (meow meow meow meow), but he much more resembles a lazy house cat. We fatten him up as if he were our Christmas goose and he lounges around without a care in the world. This business lasts until about mid March and then Pepper is jumping out of his skin again.

Pepper was born on a horse farm here in Virginia. Perhaps he was kicked one too many times, that would explain his skittishness. He was brought to my aunt’s home as a kitten. Pepper was a lively little nuisance to the entire family, especially their elderly arthritic cat. My aunt gave Pepper back to her younger brother who rescued him from the farm. He already had two cats of his own, and Pepper had a nasty habit of spraying regardless of being neutered. Needless to say he was an outside cat.

One evening my uncle pawned Pepper off on my 12 year old sister. Who in one quick scoop had Pepper in her arms and was in the car shouting “gun it!” before any of us could stop and think about the consequences. On the drive home my 14 year old sister cried “Oh Dad is going to kiiiilll us.” That is how Pepper came into our care and he has frustrated us, loved us and entertained us ever since. 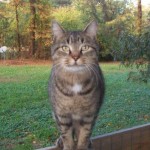